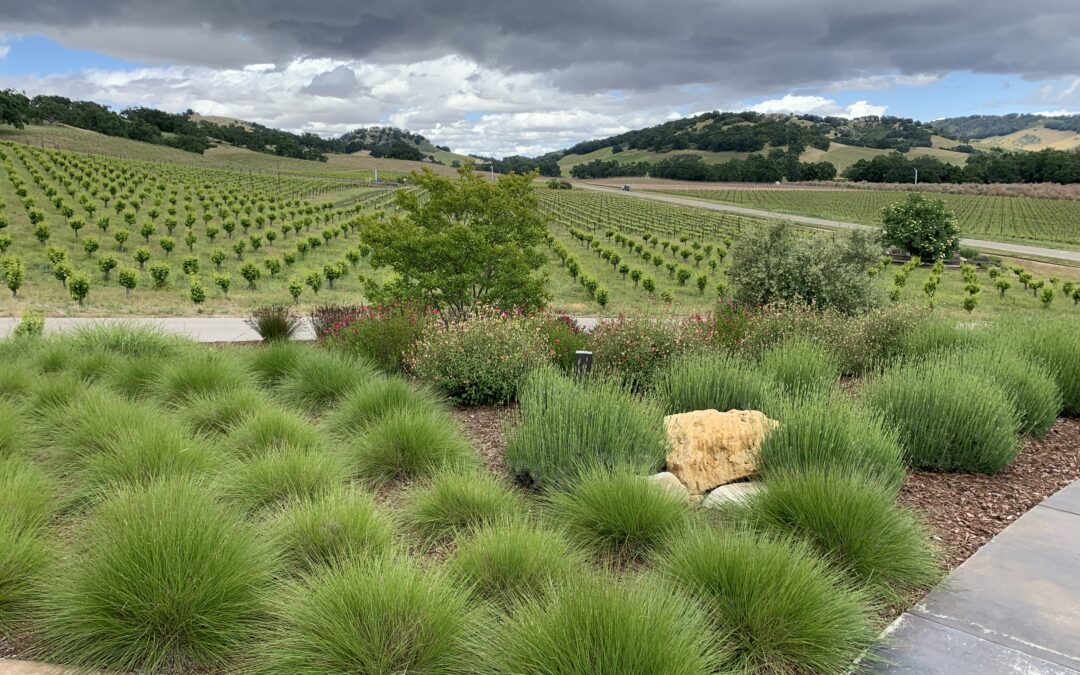 How, Why, and When to Cut Bunch Grasses: California’s Central Coast

In the Central Coast California Landscape, bunchgrasses are a common landscape element. In some cases, huge swaths of showy grasses can be a bold botanic display of texture, movement, and glowing color. A bunch grass is a perennial grass that forms clumps as it grows. They can be as small as six inches or as large as eight feet tall, usually selected for their foliage and seed head plumage. On the central coast, most species are maintained by a significant yearly haircut to prepare for the next year’s growth.

When to Cut Bunch Grasses

Most bunch grasses are cut back so they look green and fresh for the next growing season, as well as clear out dead foliage and debris for plant health. While some grasses won’t need to be cut back every year, some benefit from being cut back twice or more per year. For yearly cutbacks, the rule of thumb is to cut them back after the last hard frost. Winter foliage can be attractive even if it is brown, and it protects the plant crown from frost damage. If the grass is particularly frost sensitive, the timing should be as late in the winter as possible. In San Luis Obispo County, we tend to be split our grass cut-back timeframes between the beaches (Morro Bay, Pismo Beach, Cambria, Los Osos, etc.), the coastal valleys (San Luis Obispo, Arroyo Grande, Edna, Nipomo, etc.) and North County (Paso Robles, Templeton, Atascadero, Santa Margarita). 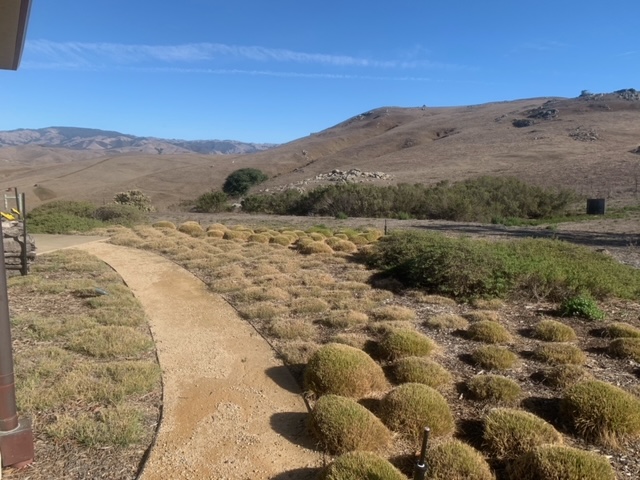 Grass cutbacks can start earliest on the beach zones because they have almost no frost and grasses start to grow even in the winter. December-January is good for most grasses along our beach towns. With the lack of frost, many more species of grass can be grown, such as Pennisetum setaceum rubrum, a beautiful Purple Fountain Grass. “Some grasses won’t show as much winter browning, so skipping their yearly cutbacks from time to time is acceptable. Because the growing season is so long, the window to cut back grasses is also more forgiving. Cutting browning grasses as late as March or April is better than not cutting them at all.”
In the coastal valleys, February is a great month to cut back grasses, but it can happen anytime between January and March. There is limited frost, so grasses such as the Purple Fountain Grass may want to wait until March, but most grasses are completely safe for a February cut. This zone is very similar to the beaches, but it may take a little longer for the grasses to green back up, hence the later cut. 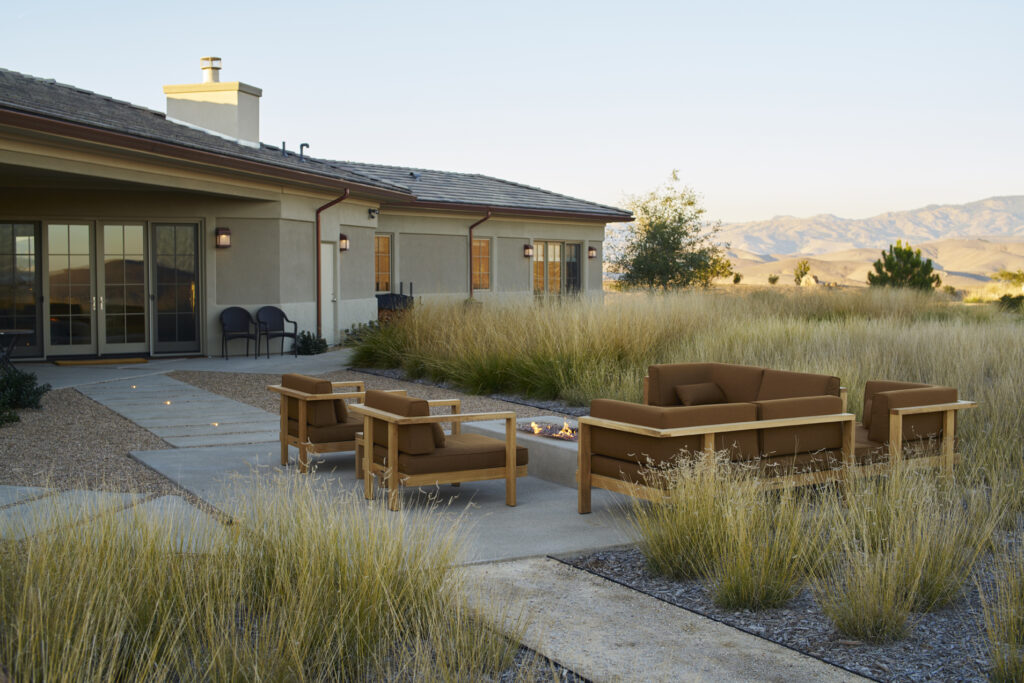 North County of San Luis Obispo County is much different than the rest of the county. The Santa Lucia Mountain Range separates it from ocean influence, making it much colder in the winter. For that reason, the cutbacks occur later to wait for the hard frosts to subside. In addition, most grasses in north county don’t start pushing new growth until April. February through April is the window for north county grass cutbacks, with March being an ideal month. While April is okay, cutting back the grasses after the spring flush should be avoided. While grass species are more limited in North County due to the cold, the explosive growth of the hot summer and the seasonal look of brown winter plumage can be stunning.

The bottom line for timing of grass cutbacks is to maximize the aesthetics and health of the plants. Try to minimize the downtime of a cut back bunch grass stump by waiting until the plant is just about to push new growth. Fine-tune the specific timing for your zone and grasses over the years to maximize your enjoyment of these versatile plants.

How to Cut Back Bunch Grasses 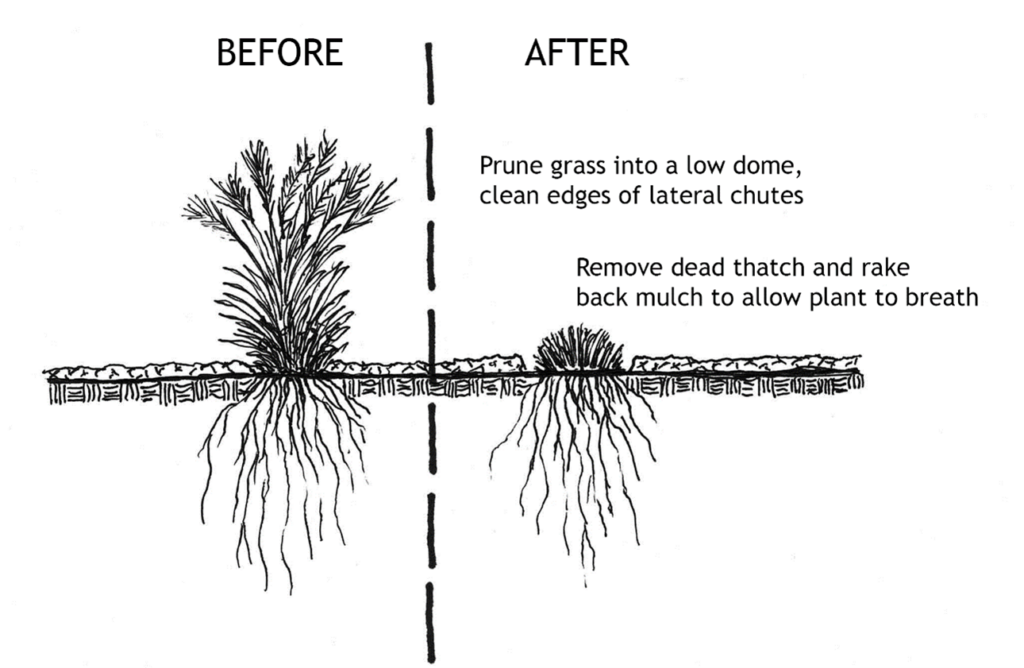 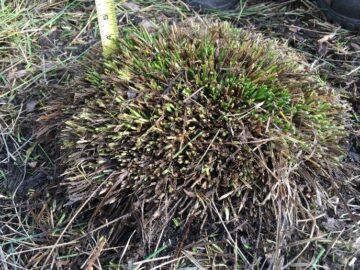 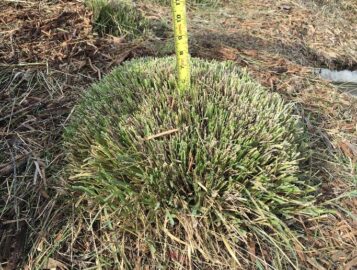